Hayfield Elementary School was founded in the fall of 1966, and our building opened on Friday, January 13, 1967. Our first principal was Dorothy O. Hoge. Prior to January, Hayfield students were housed at Hollin Meadows Elementary School and attended classes on half-day modified shifts. In January 1967, the Alexandria Gazette newspaper reported: "Notified two days earlier that the school would be ready to receive them Friday, the students were alerted to bring large paper bags from home to hold their belongings. Then on Friday, they were picked up by bus as usual, taken to Hollin Meadows where they picked up their packed sacks, bade goodbye to their hosts at Hollin Meadows, and re-boarded the buses for the five-bus caravan to their new quarters on Telegraph Road."

Hayfield Elementary School was designed by the architecture firm of Pickett, Siess, and Hook, and was modeled after their plans for Spring Hill Elementary School. Our school was built by Burroughs & Preston, Inc., at a cost of $555,500. 295 students walked through the doors of Hayfield on opening day and, by the end of the month, enrollment had grown to 318 children with 11 teachers. On the first floor of the building were nine classrooms, two activity rooms, a conference hall, administrative office, and a multi-purpose room/ cafeteria. 11 additional classrooms, an audio-visual center, and the library were located on the second floor. 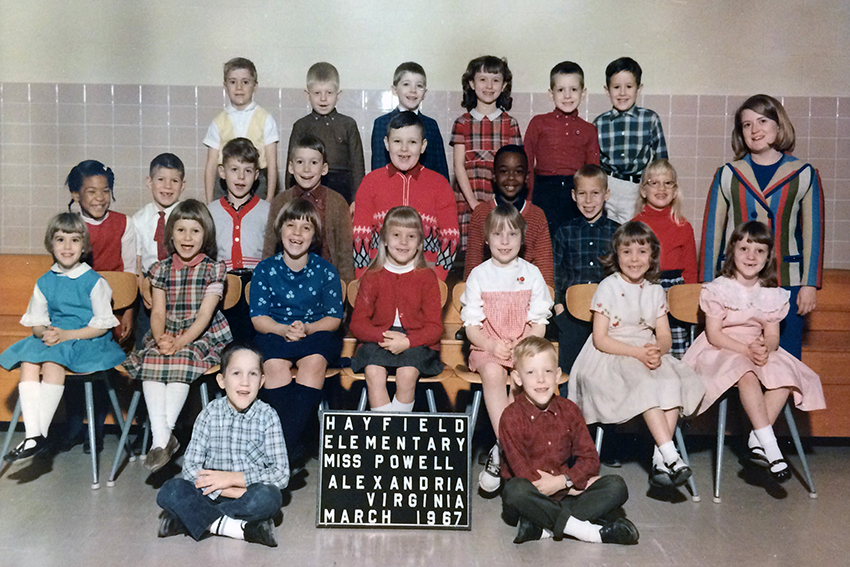 Hayfield Elementary was dedicated at a ceremony on Sunday, May 21, 1967. Virginia's Lieutenant Governor, Fred G. Pollard, spoke at the dedication, and his remarks touched on the history of the Hayfield area. Our school was built on land once owned by President George Washington who, in 1785, sold the property to his cousin Lund Washington. Lund Washington’s property became known as Hayfield Farm. Learn more about the history of Hayfield Farm in this video produced for Fairfax County Public Schools’ cable television channel Red Apple 21.

By November 1970, enrollment at Hayfield swelled to 760 students, well over our building's original 600-pupil capacity. Four Quonset trailers, like the ones pictured below, were brought in to handle the overflow.

In February 1972, construction began on the first addition to Hayfield Elementary. At this period in Fairfax County Public Schools (FCPS) history, the "open classroom" movement was in full swing. Open classroom schools were built differently from the "egg crate" style schools built in Fairfax County pre-1968. The oldest portion of Hayfield was constructed in the egg crate style, which emphasized rectangular buildings with long rows of classrooms separated by a central hallway. Open classroom schools placed groups of door-less classrooms around an open area called a "pod" or "learning bay" as it was called at Hayfield. Typically, five or six teachers were assigned to a pod, which held students from multiple grade levels grouped according to their subject-matter skill level. The new addition to Hayfield was built in the open classroom style.

Two pods, with space equivalent to ten classrooms, a gymnasium, and a music room were constructed in 1972 at a cost of $582,000. The original library was converted into a science lab, and a new media center was built in the open classroom wing of the building. The addition increased Hayfield's capacity to 900 students.

From the mid-1970s into the early 1980s, student enrollment began a gradual decline resulting in the closure of several schools in the eastern part of Fairfax County. The closures affected neighborhoods that saw the earliest growth post-World War II. By 1979, enrollment at Hayfield had fallen to 509 students. Two years later, in 1981, enrollment bottomed out at 423 students. The closure of several schools in the Alexandria section of Fairfax County, and the subsequent redistricting, stabilized our population to approximately 500 students by the late 1980s.

In 1991, construction began on a second addition to Hayfield Elementary School to provide classrooms for the School Age Child Care (SACC) program. Our school's first building-wide renewal began in July 2000 and was completed during the summer of 2003 at a cost of $6 million. Additional classrooms, a hallway connecting the learning bay to these new classrooms, and a courtyard were constructed. Hayfield was rededicated on September 29, 2003, as part of our school's 35th anniversary celebration.

Did you know that when Hayfield Elementary opened there were no kindergarteners in our school? A kindergarten program was piloted in several schools in 1967 and proved so successful that one year later FCPS implemented kindergarten county-wide. FCPS enrolled approximately 8,000 children in kindergarten in September 1968. 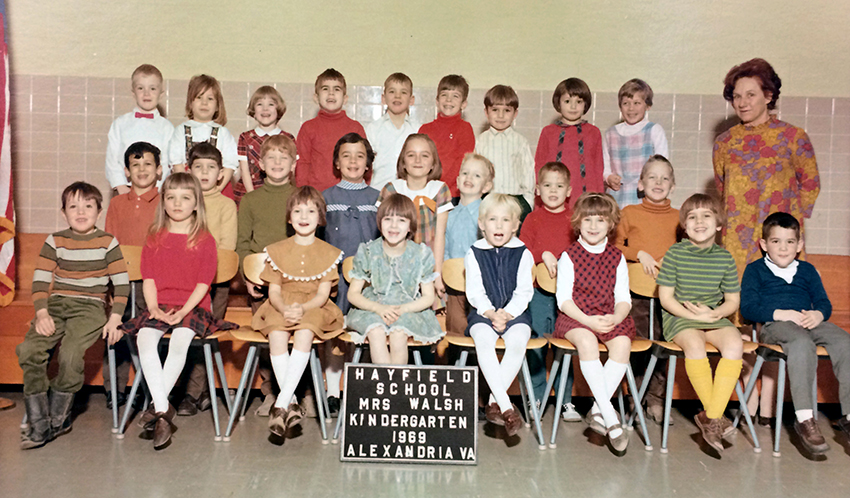 The American flag quilt in our library was constructed by Suzanne Shaw. Hayfield students and staff helped to make the quilt pieces “in memory and appreciation for all Americans who have worked tirelessly, sacrificed so much, and dedicated their lives to keep our country free.” This memorial was displayed in the wake of the events of September 11, 2001 and still hangs today.

Today, students with special needs learn alongside their peers in general education classrooms, but this was not always the case. Hayfield Elementary School was one of the first schools in FCPS to implement "mainstreaming," as this practice was originally called, in the 1980s. In May 1999, Hayfield Elementary School received a national award for our "exemplary special education inclusion program" from the Allyn and Bacon Publishing Company and the Learning Disabilities Division of the Council for Exceptional Children. The award, presented at the council’s national convention in Charlotte, North Carolina, included a $1,500 stipend to be used for special education staff development.

Hayfield has had eight principals since our school was founded in the fall of 1966.